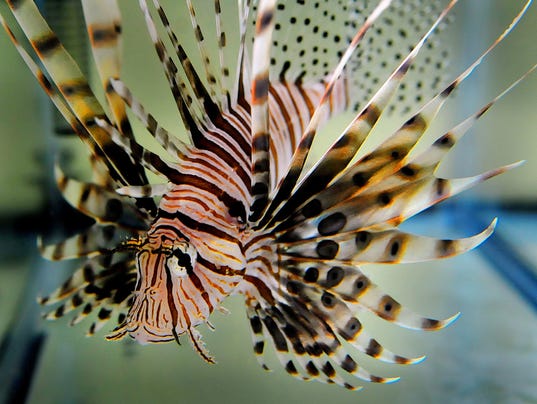 Lionfish have thrived in the waters off Florida since they were first dumped by aquarium collectors in the mid-1980s.(Photo: News Journal file photo)

A new documentary set to debut in Pensacola later this month looks at the growing threat invasive lionfish pose to Florida’s recreational fishing and seafood industries.

“Reef Assassin” explains how the colorful and venomous fish with lion-like manes of feathery fins have thrived in the waters off Florida since they were first dumped by aquarium collectors in the mid-1980s.

Three decades later, lionfish are a threat to most other species in waters stretching from the Caribbean Islands to the mid-Atlantic states of the U.S., said filmmaker Maribeth Abrams.

“It was very eye opening for me to be part of the investigation that we did for this project,” said Abrams, producer, editor and narrator of the Skyline Films project. 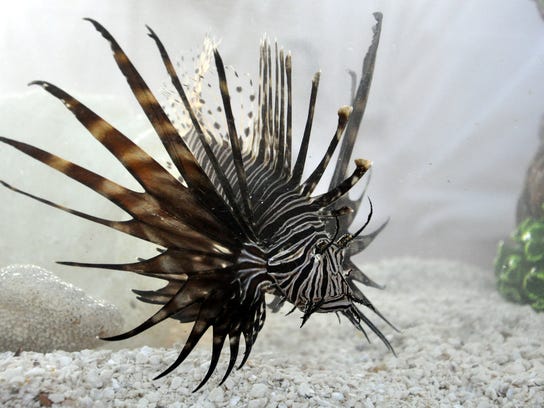 Lionfish have thrived in the waters off Florida since they were first dumped by aquarium collectors in the mid-1980s. (Photo: Special to the News Journal)

Abrams and her crew traveled throughout Florida and to Newfoundland, Canada, and Barbados while gathering information for the 55-minute film. Much of the filming happened in the Florida Panhandle — the region considered to be Florida’s lionfish capital because of the high numbers of the fish found in area waters.

The film draws parallels between the collapse of Newfoundland’s cod fishing industry decades ago to the present-day threat posed by lionfish to native fisheries around Florida.

“Because of over-fishing, the fish that were being caught were not being replaced. We talked to people (in Newfoundland) who lived through the collapse, and they describe a very, very bleak situation,” she said. “We look at what happened when a culture that is dependent on fishing no longer has fish to catch.”

Among those interviewed for the project was Robert Turpin, Escambia County’s director of marine resources.

Turpin, who is helping organize Pensacola’s third annual Lionfish Roundup event on May 20 and 21, said some progress is being made in the lionfish fight.

Area spear fishermen collected more than 8,000 lionfish from Pensacola-area reefs during the 2016 Lionfish Roundup, he said.

And, Turpin said, researchers are coming up with better ways to trap lionfish in deep waters.

Lionfish cannot be caught with a traditional rod and reel. The best way to remove them is through spear fishing, which is expensive and labor intensive.

“The traps have been a source of great optimism, at least in my mind, because they can more effectively remove the lionfish compared with scuba divers whose bottom time is limited by air capacity,” he said.

And traps can access deeper waters that are out of reach for divers, he said.

Also interviewed for the film was Candy Hansard, president of the Destin-based Emerald Coast Reef Association. The nonprofit encouraged the Florida Fish and Wildlife Conservation Commission to enact its Panhandle Pilot Program, which provides tags allowing divers who collect large numbers of lionfish to collect greater numbers of desirable fish like cobia and red grouper.

But, Hansard said, the state and federal government should provide lionfish harvesters with even more tags for commercially desirable fish, including red snapper, trigger fish and amber jack. And the tags should be provided year round, not just when the season for a specific species is open, she said.

“What we are trying to do is to have our state and federal leaders wage an all-out war on the lionfish. In order to do that, we are going to have to recruit tens of thousands of divers to go out and slaughter fish aggressively, but right now there isn’t really any motivation for them to that,” she said.

Hansard said rewarding lionfish harvesters by allowing them to bring in greater numbers of commercially desirable fish appears to be the best option for curbing lionfish growth, she said.

The lionfish, native to the waters of the Indo-Pacific region, is a voracious eater that lays millions of eggs and has no known predators in the Gulf of Mexico. Lionfish devour the fry of native fish species, including grouper, red snapper and trigger fish and juvenile shrimp and crabs.

“The crisis is so huge that if we don’t take very aggressive action very quickly, we are risking catastrophic damage to our native fisheries and everyone who depends on those fisheries, from charter fishing to commercial fishing,” Hansard said. “We are talking billions of dollars in economic destruction.”

The Pensacola debut of “Reef Assassin” is scheduled for 7 p.m. May 20 at Hagler Auditorium on the campus of Pensacola State College.

The filmmakers plan to film a panel discussion with questions from the audience following the film screening. Portions of that could be used in the followup documentary, the filmmakers said.

In the largest Key Largo Winter Lionfish Derby ever, 48 underwater hunters on 14 teams fanned out at dawn to remove 420 lionfish from Florida Keys waters in the one-day contest.

READ MORE: The lionfish: King of the ocean no more?

Also turning in big harvests in the fifth annual contest were runners-up Fancy Feast Killaz squad with 97 lionfish and the Lion Reapers with 97 of the unwanted invasive fish.

The team from Ocean Divers bagged the biggest lionfish, recorded at 452 millimeters. That’s “the largest lionfish that has ever been turned in at any official REEF Lionfish Derby,” said Emily Stokes, a lionfish-program staffer with the Reef Environmental Education Foundation, based in Key Largo.

A researcher from the University of Pennsylvania attended the contest to examine and analyze the stomach contents of harvested lionfish, which are considered a major threat to native fish species including snapper and grouper, along with other reef fish.

Lionfish, a Pacific Ocean species, defend themselves with an array of venomous spines and have no significant natural predators in Atlantic waters. A lionfish will eat anything that fits in its mouth and can reproduce throughout the year.

Some reefs in the Bahamas have lost from 65 percent to 95 percent of the native fish to lionfish in a two-year period, Oregon State University biologist Stephanie Green reported.

“Regular removals and removal events such as derbies have been found to significantly reduce lionfish populations” at local reefs, Stokes said.

Samples of lionfish ceviche were given away at the Key Largo contest, hosted by Sharkey’s Pub & Galley, to promote awareness of lionfish as a tasty seafood treat.