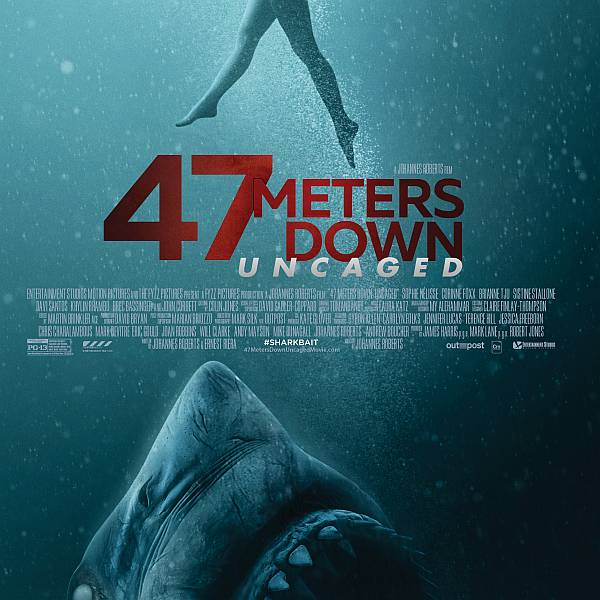 Just as we’re getting a rash of shark sightings off the coasts of California, “47 Meters Down” is hitting theaters.

It almost didn’t. The thriller about two sisters, Mandy Moore’s Lisa and Claire Holt’s Kate, whose Mexican vacation turns nightmarish when the shark cage they’re diving in slips its cable and hits the ocean floor some 150 feet below, was originally called “In the Deep.” It was just about to go straight to home video when its original distributor, The Weinstein Company’s genre division Dimension Films, sold it to Byron Allen’s Entertainment Studios (literally; trucks carrying the DVDs and Blu-rays to Walmarts all over the country had to be recalled).

Which was a nice surprise for Moore, who currently stars on the beloved new NBC series “This Is Us,” and Holt, the Australian actress best known for portraying the less-than-lovable Rebekah on the CW’s “Originals” and “Vampire Diaries.” Deserved, too; they literally put their lives on the line to make this movie, so the results should be seen on a big screen.

“The thing we were a little apprehensive about but also excited about the challenge of was, we were doing everything you’re not supposed to do,” notes Holt who, like Moore, had never scuba dived before getting a few quick lessons for the “47” production. “Even though we were acting, we were doing really quite dangerous stuff and no one had really done that before. We spent eight weeks hyperventilating, no one really knew what that would do or how that would affect us. It was certainly nerve-wracking, but I think we found our rhythm and managed to survive it.”

“There was a lot to take into consideration in terms of physicality, like how we were overextending ourselves and acting underwater,” adds Moore, the former teen singing sensation who additionally notes that they had to pass a two-hour insurance physical before being permitted to make the movie. “When I read the script I went, Wow, I’ve never seen a movie like this before that takes place primarily underwater. In that sense, we were kind of guinea pigs. No one knew what effects eight weeks every day, under water, would have on our eardrums and lungs.”

Most of that business was conducted at The Underwater Studio in Basildon, England, the director Johannes Roberts’ (“The Other Side of the Door”) native land. He’d stay above the tank the actresses and their rusty cage were submerged 20 feet deep in, giving directions via large underwater speaker. Holt and Moore wore big diving masks with radio connections they could speak their lines through, but that could only be heard topside and by each other. The crew in the tank filming them had to communicate by other means.

“We developed this sort of underwater sign language with the camera crew, It was almost unspoken by the end; we could just read where they were going and kind of what they needed,” Moore explains. “It became easier as we went along. Because so much of it was when we were in close-up and it was just our eyes, it was pretty easy for them to say you’re gonna look over here or over there.”

All the Great Whites seen in the movie were computer generated. However, as any modern movie actor will tell you, they as well as the digital artists need something on the set for eyelines to follow and animated creatures to be properly placed within the frame. There was a bright idea for doing that in the Basildon tank, but like many a bright idea . . .

“We had a shark surrogate for a moment, then quickly realized it was a mistake,” Holt reports. “I guess it was a plastic shark head that a lovely fellow called Brian would swim around attached to. They used it sometimes for the CG, just so they could have a reference, but at other times they thought it would help our performance. It didn’t. We’d just laugh. So most of it was done with our imaginations.

“I think under water, it’s easier,” Moore muses about acting against elements that aren’t physically onset. “When you’re above ground and someone is like, ‘Godzilla right now is outside that window,’ it might be a little more difficult to conjure up than when your underwater with the constant movement and the amplified sound of you’re breathing. It wasn’t hard to imagine yourself under water; you were actually there.”

And boy, were they in it. Cinematographer Mark Silk, who directed the underwater photography for “Captain Phillips,” had the effectively bright idea of filling the tank with ground-up broccoli to approximate the look of a tropical sea. And of course, it was a major effort for actresses and crewmembers to surface, doff and reattach all of their diving gear whenever nature called, so one just did what one does when out in the open ocean.

“Listen, we aren’t ashamed of that!” Holt insists. “When you gotta go, you gotta go. There was chlorine, broccoli, a lot of crewmembers’ pee in there. It’s good for your immune system!”

“The weekends, I would take multiple showers and still not be able to rinse the broccoli smell out of my hair,” Moore reveals. “We really committed for this film.”

She’s joking, but they really did.

“I don’t think either of us realized how physically taxing it was going to be,” Moore admits. “Just all that time under water, even just the littlest movements or seemingly simple days . . . we would get out at lunchtime and I’m usually not a napper, but I couldn’t keep my eyes open. You just expend so much energy, and there was so much screaming and hyperventilating and fast movements. It was exhausting physically, and emotionally too, in a way that I didn’t expect.”

However, it was also crucial for the actresses to remember they were artists and not just performing sea mammals.

“We were conscious of making sure the film had levels, that it didn’t just live in a space that was heightened and fearful,” Holt points out. “There had to be moments of calm and connection. We wanted to give those heightened performances in the moments that required it, but also give these characters time to just be. It’s natural that humans go through a roller coaster of emotion when faced with a crisis.”

“And her character really pointed out that, in order to survive, we’d have to calm down and have these shallow breaths to not go through our air as quickly as we might,” Moore adds.

Both women say the effort was more than worth it, though neither has put a regulator in her mouth since. And they’re more than pleased that, in the shark tank known as the entertainment industry, their movie is getting a theatrical release.

“You never know,” Moore laments. “It’s such a crapshoot in this business, whether or not movies are going to get released. I had three failed pilots in a row and was reconsidering what I was going to do with my life when ‘This Is Us’ came my way.”

“I just shot a pilot that didn’t get picked up,” Holt chimes in. “That’s the nature of the business.”

As to whether our increased local shark consciousness will help sell tickets, Holt’s philosophical.

“I just think it’s a very real concern of a lot of people,” she says. “Anything that people respond to or connect with or are fearful of, hopefully they’re interested in engaging in. We’d never want shark attacks, but it’s a real thing, it’s frightening, and people respond to that.”

I’m currently cutting my teeth on video editing.  Here’s a very quick editing session (very hard to tell, right?) output that I created with my own hands…  along with the help of Apple iMovie’s easy movie creating wizard and a GoPro video camera.  I have a lot to learn about splicing video but, I can see how it could grow into an addiction.  Very satisfying to take raw video and sound and then make something cool of it all.

Many thanks to our support team, lead by Mr. Ernest Leslie – PADI Scuba Instructor and friend at Ramon’s Village dive center on Ambergris Caye, Belize.

Do you know what I like better than my first day of video editing?  Scuba diving!!!  There are some other things that I’ve enjoyed even more as well.  😉

So, go grab some microwave popcorn, some Twizzlers and a friend and click and enjoy the movie trailer below that did NOT take the Cannes Film Festival or the Sundance Film Festival by surprise…