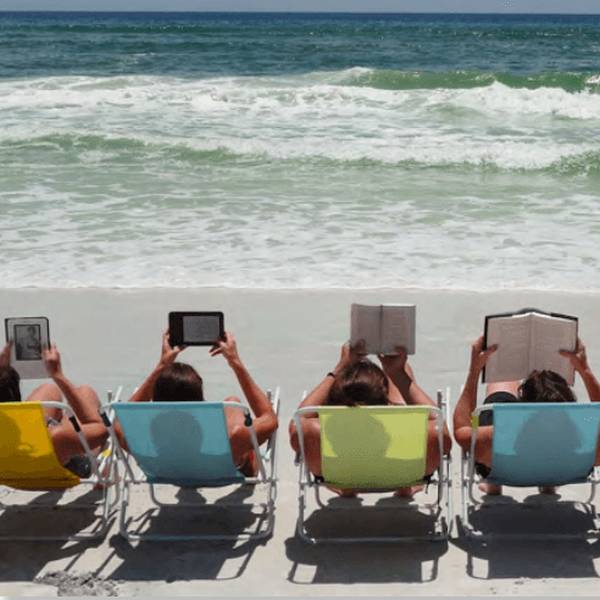 Why settle for beach reads in spirit when you can read literal beach books? From harrowing accounts of 100-foot rogue waves to James Bond’s inception in Jamaica, here are six nonfiction books set in or near the ocean. Whether you read their maritime subject matter while relaxing on the sand or in your own home, these books are guaranteed to take you out to sea.

1. The Wave: In Pursuit of Rogues, Freaks and Giants of the Ocean by Susan Casey

Casey brings you so close to the ocean’s most fearsome monsters you can feel the salt spray on your face as fear pumps through your brain. These beasts are not flesh and bone, however, but massive and nightmarish extensions of the sea itself: rogue waves. Reaching nearly 100 feet into the air, these vicious claws are waiting to scrap humanity from the ocean’s surface. By alternating between the scientists who study these phenomena and the big wave surfers who ride them, Casey delivers scenes of both harrowing action and fascinating research.

Few beaches have ever seen more influential souls on their sand than those of Newport. The Rhode Island city was the place to summer for the Gilded Age’s wealthy elite, and what the Astors, Vanderbilts, Belmonts, Oelrichs, Havemayers, Drexels, et. al. did on vacation set the pace for the rest of the country. Davis takes you inside their luxurious manses to reveal a byzantine world of social graces and opulent parties, highlighting iconic families’ origins.

3. Pirate Hunters: Treasure, Obsession and the Search for a Legendary Pirate Ship by Robert Kurson

Kurson is no stranger to underwater adventure tales. His book Shadow Divers chronicles a group of wreck divers’ efforts to identify the remains of a U-boat off the coast of New Jersey, and while the dives in Pirate Hunters are not nearly so dramatic, the Dominican setting and subject matter prove more romantic. Respected British captain-turned-pirate Joseph Bannister was legendary for fighting off two British war ships, but his name—and the final resting place of his ship, the Golden Fleece—had fallen from history in the centuries since that battle. In Pirate Hunters, Kurson follows John Chatterton (one of the Shadow divers) and John Mattera as they search for Bannister’s lost ship—and with it, historical context for the man who captained her.

4. The Soul of an Octopus: A Surprising Exploration Into the Wonder of Consciousness by Sy Montgomery

Part memoir, part scientific exploration, part philosophical musing, Montgomery’s book offers a portrait of an unusual subject: the octopus. Montgomery’s work as a naturalist belays her sharp observations, and her writing successfully tackles the more mysterious aspects of her cephalopod subject. From her first interactions in aquariums to donning scuba equipment to see the creatures on their own terms, Montgomery’s narrative is equal parts science and poetry.

A sexist dinosaur? Sure. But still the ultimate template for the summer beach read book hero? Absolutely. James Bond is a more complex literary character than he’s given credit for, and Parker’s history of Bond creator Ian Fleming’s love affair with Jamaica gives the island nation its due in the spy’s creation. In the crystal clear reefs—and the tumultuous dissolution of the British Empire in an unremitting tide—Parker finds Fleming’s true motivations for creating Bond under the Caribbean sun.

6. In the Heart of the Sea: The Tragedy of the Whaleship Essex by Nathaniel Philbrick

Philbrick’s book—which has since become a mediocre movie—tells the true tale of the Essex’s crew, who had to navigate thousands of miles of Pacific ocean after their ship was sunk by a sperm whale. Philbrick is a master of the historical narrative, writing expertly researched books that practically hum. You’ll learn everything you could ever want to know about whaling and be inspired by the same harrowing horror which sparked to life one of literature’s greatest monsters, Moby Dick.

B. David Zarley is a freelance journalist, essayis, and book/art critic based in Chicago. A former book critic for The Myrtle Beach Sun News, his work can be seen in Hazlitt, Sports Illustrated, The Chicago Reader, VICE Sports, The Creators Project, Sports on Earth and New American Paintings, among numerous other publications. You can find him on Twitter or at his website.